Simulation is a useful technique to verify and debug your Verilog designs.

There are two common open source tools that are used for simulation: Icarus Verilog (iverilog) and Verilator.

With Icarus Verilog you write a test bench for the component that you want to test in System Verilog. System Verilog has many features for testing that are not synthesizable and connot be used in standard Verilog.

Verilator is a more powerful tool that generates C++ from your Verilog code. You normally write a testbench in C++ to test your Verilog modules, and do not usually need to write a System Verilog testbench. Verilator has interactive and graphical simulators for a lot of components.

This testbench uses the uart transmitter to send two characters “H” and “e” and to write a .vcd file that can then be looked at with gtkwave to check that the waveform on the output pin is correct.

Here is the testbench, tb.v:

The testbench starts by specifying the output waves.vcd file using $dumpfile and specifies that all variables should be written to that file by the call to $dumpvars.

It then defines a clock that initially zero and completes a cycle in 40ns, i.e. runs at 25Mhz.

It then instantiates txuart and defines registers for its input signals and wires for its output ones.

The test code starts with i_wr=0 and then sends a character by setting i_wr=1 and i_data=”H”. It waits for o_busy to go to zero, for the character to have been sent, and then sets i_data=”e” to send the next character (leaving i_wr=1). When this has been sent, it sets i_wr=0 to prevent further transmission and after a few clock cycles, finishes (using $finish).

You can compile tb.v by doing:

and then run it, by:

You can then view the wave file by:

This is the relevant part of the wave file, as shown by gtkwave. You can confitm that the o_uart_tx signal is correct. 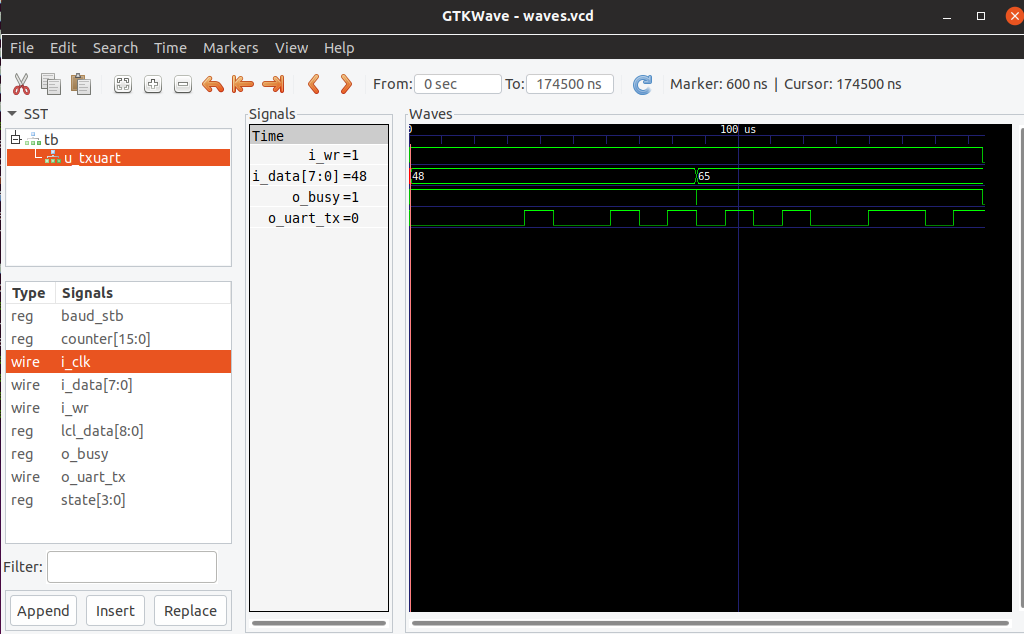 Here is an example of the use of Verilator taken from Dan Gisselquist’s ZipCPU tutorial.

You will need to install Verilator, which on Debian variants of Linux can be done by sudo apt-get install verilator, but if you plan to use SpinalHDL, a more recent version may be needed - see the SpinalHDL chapter.

The simple Verilog design (thruwire.v) from the ZipCPU tutorial is:

The Makefile for this is:

The pcf file is:

All these files are part of this example.

To synthesize that design and run it on the Blackice Mx, do make upload. When you press button 1, you should see both the blue and red LEDs come on. The blue led is wired to the button and thruwire Verilog module causes the red LED to come on when the button is pressed.

To run the verilator simulation, you need the thruwire.cpp file:

You then do make sim to build and run the simulation and you should see this output:

There is a lot more information in the ZipCPU tutorial.

In particular, the design above is a simple combinatorial one that does not use a clock. Most designs use a clock and your cpp will need a function such as tick to advance the clock each cycle and do an evaluation to determine the state of all the variable after the clock has ticked.

If your clock is called i_clk and your top-level Verilog module is called top, your tick function can be defined as:

If you want to produce a wave file for analysis by gtkwave, you include a code such as: